On eldritch terrors from beyond and their Twitter accounts

Horror themes, links to and discussion of overtly prejudiced writers who are racist, sexist or homophobic 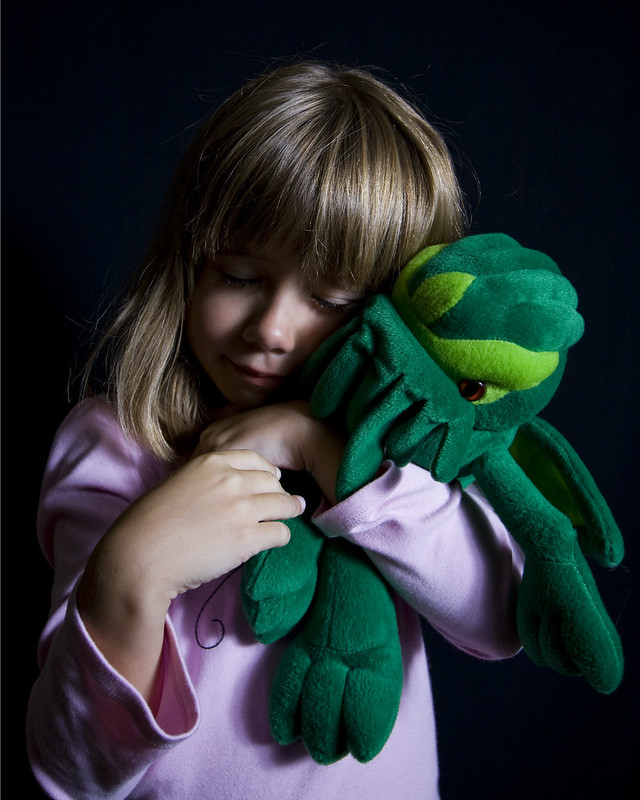 A girl and her plushie by Bart

Recreationally staring into the abyss. I do enjoy a bit of horror fiction, especially with a political inflection.

I am interested in examining some trends in recent horror writers (who I will call horrorists to save a syllable). But rather than getting to the core, here is a lightly decorated listicle of trends and thoughts I may get around to packaging up into a real essay later.

Some of the writers on this list share a red-pill motif, in the sense of the feeling of horror arising from seeing painful truths that the snowflakes can’t handle. And the painful truth is that the horror is other people. Probably, in fact, other people who look different than the imagined audience. Maybe black people, if you believe you are talking to white people. Or women. Quasi-biological-class-determinist, Houellebecq and Deep-State-is-Cthulhu-Actually, Zero HP Lovecraft, could serve as waypoints along a red-piller’s path to the endimming. Indeed, a dark enlightenment progenitor, Nick Land a.k.a. The Whiteness Out Of Space, is a horror writer.

A recurring theme (Houellebecq, Tacos, Zero HP Lovecraft) is pluralistic ignorance, i.e. the real horror is that we are all surviving in a vicious social norm that we individually secretly hate but publicly endorse for fear of censure. In this Emperor’s-new-clothes variant of the Cassandra myth, the protagonists can see the truth but cannot say it for fear being pilloried by other Cassandras. The Cassandras are locked in a dilemma of collective action. The author, in these cases, is the real Cassandra who dares to speak the forbidden truths but will not be believed by society at large. This particular horror fails to land for me personally, because it does not tally with any experience I have had. Maybe I am that one arsehat who is happy with the social norm, and by enforcing it ruining it for the silent masses?

The kind of awful inescapable horror I more often fear is the moral maze, where we can all see and acknowledge that the situation is not ideal but our local incentives mean that we nonetheless cannot escape. In stylised examples, if you talk about things in a pluralistic-ignorance-kind of horror, the imagined risk is the condemnation by other patsies. “Maybe this thing that most people think is bad is actually bad” you say, and all the other bad-thing-haters punish you for stepping out of line for speaking the truth. Probably on twitter. In a moral-maze-kind, the horror is more that we all know we are in it together but are still doomed. “Oh no, would it not be great if we were not all part of the problem?” you ask, “Yes, but how can we get there? My kids have to eat,” your colleagues answer, then your kids end up stabbing each other in the streets over food. This is the kind of horror that, e.g. Peter Watts writes, where we are all turned into monsters by going down a path where at every step we chose the least monstrous option. Which type of horror lands for you depends possibly upon experiences, attachment styles, paranoia etc.

The incomprehensible dread of the mediated digital world is another thread through these. Consider the conspiracy mania sweeping the internet, which is taking an occult turn. Or the uncanniness of the internet itself. Margot Harrison: Or The Social Construction of R’yleh.

That old aesthetic term for creeping dread, famously dissected by Freud, is typically now applied to disturbing specimens of digital animation said to reside in the “uncanny valley.”

[…] The dead live on in their videos and social media feeds. Thanks to targeted advertising, a pair of boots we put in our cart months ago stalks us at every turn. The notion that a single utterance can turn a random citizen into an influencer might have sounded to Freud like magical thinking. We see it happen every day.

Or consider the uncanny motif of the double, which has inspired writers of dread from Dostoyevsky to Tana French. The fear of having our identity appropriated by a look-alike doesn’t seem atavistic in the era of catfishing and deepfakes. We all lead parallel lives in which presence is absence and reality is malleable. But I think there are more uncanny and dangerous systems we are aware of than the merely digital. Economist Bryan Caplan is briefly and provocatively a horrorist in this excellent metaphor about minimum wage:

I honestly wonder if we’d have better luck explaining economics if we used the metaphor of a terrifying and incomprehensible alien deity that is kept barely contained by a complicated and humanly meaningless ritual, and that if somebody upsets the ritual prices then It will break loose and all the electrical plants will simultaneously catch fire. Because that probably is the closest translation of the math we believe into a native human ontology.

Want to help the bottom 30%? Don’t scribble over the mad inscriptions that are closest to them, trying to prettify the blood-drawn curves. Mess with any other numbers than those, move money around in any other way than that, because It is standing very near to them already.

I love this explanation. There is something deep going on in it. Quibbles: not only economics can own the eldritch horror of its subject matter; probably every social science can. And marine biology. Also I disagree of his characterisation of why one might support minimum wages (tl;dr: electoral pragmatics rather than economic optimality), but that is an essay under a different heading.

Lovecraftian intelligences are so alien that we’ll never really be able to resolve the argument over whether they’re truly intelligent or not. But unlike other alien intelligences that display their incomprehensibility at all times, Lovecraftian intelligences trick us most of the time—they seem human right up until they don’t. And this is an inherent property of the way they’re created—in the case of Lovecraft’s horrors, they’re the product of a fantasy author’s twisted mind, and in the case of AIs they’re tools that we create to do our bidding. They are a product of humanity, and this is what allows them to be so creepy to humans.

There are diverse abysses to gaze into. Gaze on. There is also a goodreads list. See also Nightmare Fuel.

Something like scpwiki makes a horror fan-fiction of reality. See, e.g. infinite IKEA.

Ric Royer, The Horror is that There is No Horror

Beyond the happy endings, commercialization, reduced violence, and cops tying a bow on it all, horror films that exploit our era of extreme partisanship tend to be a low-risk, conservative venture. As horror legend John Carpenter notes, these narratives are not only easy stories to tell, but easy to sell: “The easiest story that people will buy … is that evil is out there, beyond the woods, beyond the dark, the evil is the other … because the audience is always going to respond to the ‘other.’ It unifies us as a tribe.”

Yokay here are some recommendations.

Everything this former marine biologist touches turns into posthuman ooze. (“What if the real grey goo was inside your skull all along?”) Gritty depictions of a future in which humans are cockroaches in the diverse biome of posthuman life and which eradicates them in incomprehensible ways. Recommended: The Firefall series, in which the superior post-humans that rule the future rarely stop to explain their fears to humans about the even more superior aliens that pop by.

In Laundry Files, a series gradually sliding from public-service/dotcom office snark into dark tech Sleeper-in-the-Pyramid weirdness. The density of the puns is decreasing as their magnitude increases throughout the series.

The Odd Jobs series is Birmingham comedy civil service horror. The monsters from beyond have a flavour of Brexit-climate-change-with-tentacles. I find it satisfying and cathartic and relatable in a prim medium-density-urban kind of way. The upwardly-mobile god monsters send their kids to private schools and worry about landscaping in between sucking out souls.

This guy (?) can turn an arresting phrase and a horrific image, in e.g., God-Shaped Hole, a tale of an augmented reality future in which our wistfully unsocialised protagonist and his PUA AI dating assistant encounter the spammy post-human dark sex gods arisen from Generative Amorous Networks.

Aside: I suspect Zero leans neoreactionary based on his tweets, which makes me wonder vaguely if some of the layers of horror a conservative would experience in his stuff passed me by. (UPDATE: oh yeah, he is deep in the frog right.) Maybe there would be still more if I were terrorised by the hot queer robot sex motifs. 🤷‍♂ Anyway, there is still enough macabre to go around, and social media future extrapolation is slickly done.

He wrote a biography of H.P. Lovecraft and Atomised is full of a certain type of biological horror so I’ll count him. His later books seem to be more things-that-scare-baby-boomers-horror, which has not grabbed me so much.

Another marginal entrant in this classification. The pseudonymous Delicious Tacos writes books with (appropriately enough I suppose) a complicated exploitative relationship to the complicated and exploitative PUA community. Has that Houellebecq aura of speaking painful-ideas-through-pluralistic ignorance, except maybe funnier? Interview excerpt that gives the flavour:

Part of the plot involves weaponized blackmail, with personal data being leveraged by a terrorist cell. In the wake of the Ashley Madison dump and so many instances of doxing, it’s an eerily plausible scenario — and of course this ties in with our increasing technological dependence. Maybe there’s not a nuclear holocaust at the end of the chain, but do you see things coming to a head?

This is that aforementioned pluralistic ignorance theme. Perhaps I am the fool. I think the odds are good that we humans all harbour varying degrees of racist/horny/greedy/etc impulses and I thought we all believed that and chatted about it reasonably openly both on the anonymous internet and in intimate conversations. The shame, I imagined, comes from letting our random less-than-angelic impulses go unchallenged out into the world. Perhaps I am the fool? Or maybe Delicious Taco’s family would benefit from some group therapy and/or MDMA idk.

The lauded Southern Reach series (now a motion picture!) seems popular. I am AFAICT the only person in the world who did not like Annihilation, the first book, and have not read the rest. The components are body horror/weird trippy cut sequences/bureaucratic authoritarian satire framed as a found-footage Blair-Witch-project-with-talking-psilocybe. I dunno, maybe if it were the first time I had tasted such a combination it might have blown me away, but as it is, I have read a lot of trippy shit and my jaded palate found nothing new here. This book to me had the flavour of a bunch of separately tasty ingredients stirred together into an undifferentiated mess. Also, cardinal sin in my narrative preferences: lack of structural payoff. There is no room for a plot twist; it is displaced by perpetual plot wringing.

Further, this tale does not relate to my world. I prefer my horror connected to my lived experience by stronger sinews than this; there is no horrifyingly plausible version of my future in here, no alternative take on my present, no matter how much I say woooooo but is it? This is a parable about a world which I clearly cannot visit and in which I have no pen-pals.

Recommended for lovers of numinous fungus.