Phylogeny of art, especially music. When do genres speciate? I am thinking about the artworks themselves. When we are considering the scenes around the artworks I wuld think more about scene dynamics. 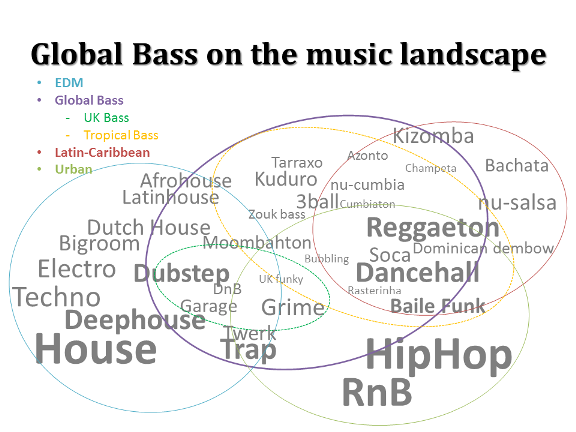 For a data-driven approach, see Glenn McDonald’s Every Noise at Once. This has become notable for inventing new hot genres. See, e.g. Cherie Hu’s What Is “Escape Room” And Why Is It One Of My Top Genres On Spotify?

After some archaeological Internet digging, I found a partial answer in Every Noise at Once, an interactive “scatter-plot of the musical genre-space” developed by Glenn McDonald, a Data Alchemist at Spotify (via The Echo Nest). Every Noise maps all of Spotify’s genres and their [dis]similarities by pulling from the Echo Nest API, which characterizes every song uniquely along 10 internal indicators, including tempo, loudness, danceability and emotional positivity.

I experienced McDonald’s bottomless music knowledge firsthand last month, when he spoke on a music-tech panel I moderated at MIT’s Hacking Arts conference. He riffed candidly on technology’s ability to provide infinite shelf space and discoverability for music, creating an unprecedented global archive of otherwise niche and isolated genres (Norwegian hip-hop was one of his favorites).

Here is a pretty explanation: Are Hit Songs Becoming Less Musically Diverse? By Andrew Thompson and Matt Daniels. Illustrations by Damián Gaume. I take issue with some of their methodology, and their models of what distinctness even is, but it is fun.

For a semi-quantitative sociological approach, see (Lena 2012; Lena and Peterson 2008).