I’m dabbling here; My interest in historical linguistics is amateur. But I do find etymology addictive.

The correct medium for a largely oral history is I suppose audio. So check out Kevin Stroud’s amateur but expansive History of English podcast. 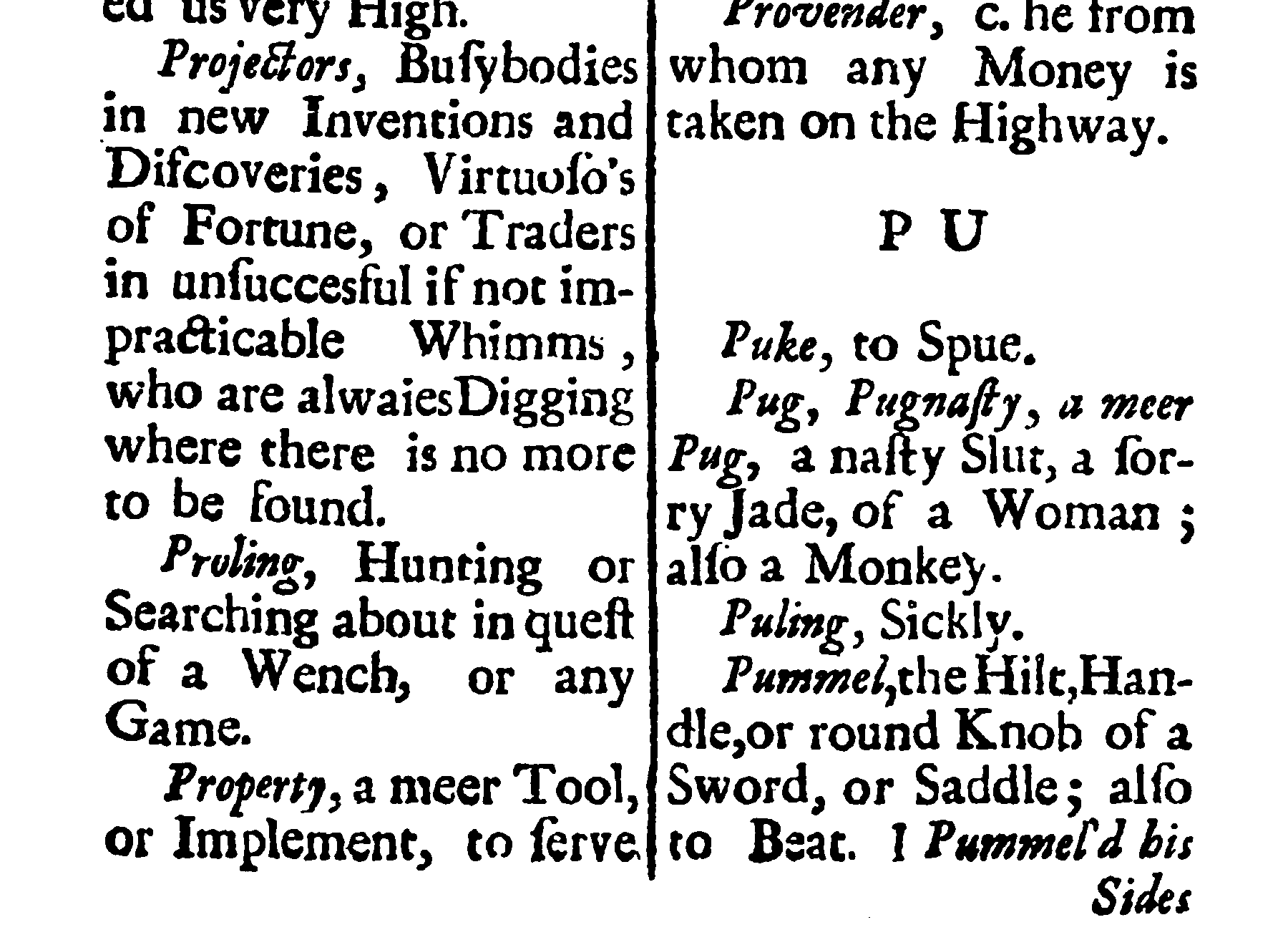 From the New Dictionary of the Canting Crew

There are all free online and could greatly season a modern vocabulary. I am not at all sure they are especially real, but we can pretend.

Belch
All sorts of beer; that liquor being apt to cause eructation.

I’d like to read aloud some Chaucer to entertain my Swiss flatmates. This is not trivial; a lot happened to English in the last millennium or so.

[…] For instance, some specialists make consonants sound much like consonants in modern English, except clearer, more precise, while other specialists speak consonants as they would in Danish or, God help us, German. For the beginner there’s a valuable lesson in this: Chaucer’s Middle English is relatively easy to fake. What follows here are some notes on how to fake it convincingly, so that one gets pretty clearly the sound of Chaucer’s verse, making people who know the correct pronunciation believe momentarily that perhaps they’ve learned it wrong.

Read aloud or recite with authority, exactly as when speaking Hungarian — if you know no Hungarian — you speak with conviction and easy familiarity. (This, I’m told by Hungarians, is what Hungarians themselves do.) This easy authority, however fake, gets the tone of the language, its warmth and, loosely, outgoing character — not pushy like low-class German, not jaundiced or intimate-but-weary, like modern French, and not, above all, slurred to a mumble, like modern American. Make Middle English open-hearted, like Mark Twain’s jokes…

Not so much historical as unhistorical, a language based solely on Old English root words instead of all these danged foreign loan words.

The Anglish Wikipedia is occasionally brilliant, covering such worthy topics as The Oned Rikes of America and translating Star Wars. Possibly inspired by the Paul Anderson classic essay on Uncleftish beholding.

For most of its being, mankind did not know what things are made of, but could only guess. With the growth of worldken, we began to learn, and today we have a beholding of stuff and work that watching bears out, both in the workstead and in daily life.

The underlying kinds of stuff are the firststuffs, which link together in sundry ways to give rise to the rest. Formerly we knew of ninety-two firststuffs, from laterstuff, the lightest and barest, to ymirstuff, the heaviest. Now we have made more, such as aegirstuff and helstuff.

Caulfield, James. 1793. Blackguardiana: Or, A Dictionary of Rogues ... London: Printed for J. Shepherd. https://catalog.hathitrust.org/Record/008613391.
E, B. 1899. A New Dictionary of the Terms Ancient and Modern of the Canting Crew, in Its Several Tribes, of Gypsies, Beggers, Thieves, Cheats, &c., With an Addition of Some Proverbs, Phrases, Figurative Speeches, &c. London Smith, Kay. http://archive.org/details/newdictionaryoft00begeuoft.
Grose, Francis. 1811. Dictionary of the Vulgar Tongue. https://www.gutenberg.org/ebooks/5402.