Music production is an interesting case study in reproducibility, network effects, and the economics of late capitalism. It’s also pertinent for me as an electronic musician. 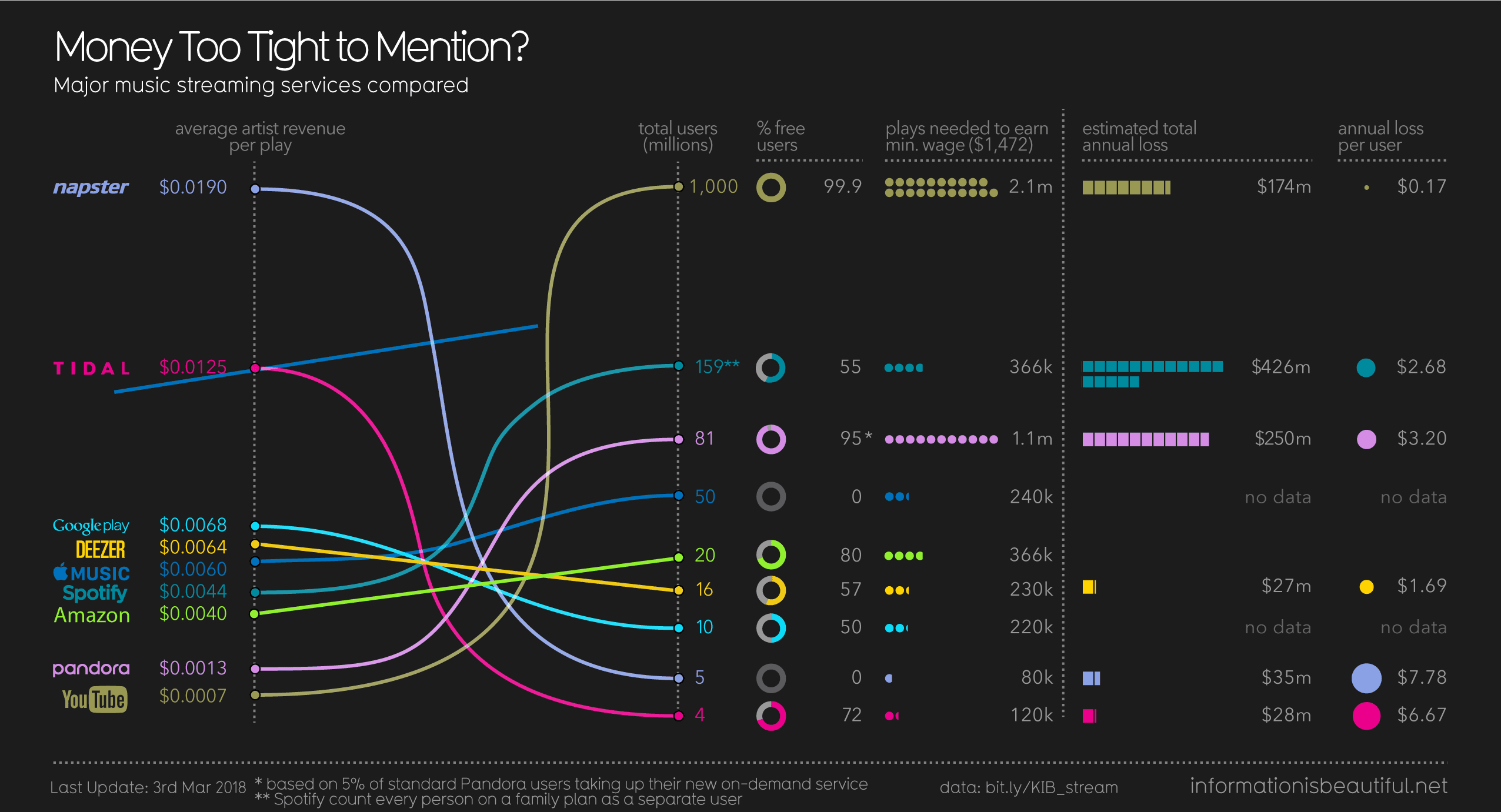 Also, How much do artists earn online?

China seems to be special, at least compared to the west. Multimodal Business Models as a Product Strategy by Connie Chan:

apps in the United States are part of either the eyeball economy or part of the wallet economy.…

Due to the heightened competitive environment in China, platforms can not afford to not simultaneously seek alternative revenue streams and find ways to monetize without harming the user experience. Take Tencent, for example — a consumer internet company with skyrocketing revenue and a very diversified revenue stream… In Tencent Music, there are leaderboards for gamification, social radio and singing, live concerts, and even a TMZ-type portal for discovery. In short, there are many ways for listeners to engage with music and the artists. But perhaps the biggest difference of all is that the company’s focus is not just listening and consuming music, but also creating content and allowing users to earn money.

There are certain obvious trends with streaming music production.

Platform logic, under the seductive narratives of equal access and ‘democratisation’, has gutted the institutions and habits (i.e PAYING FOR STUFF) that make artistic social mobility possible. Equal ability to publish something means nothing when only those with the ability to fund promotion of the work are discovered. I’ve said it before, there will be an abundance of free culture, and free time, in the slums. Amazon can produce your product cheaper than you can, and strong arm you out of business unless you work with them. Facebook can acquire any competitor before they become dangerous. Pop music can appropriate and spit out your micro-scene before it has any ability to generate its own momentum, or it’s own funds.

Mat Dryhurst is Holly Herndon’s parter, and quite the thinker.

… these great stories that we have told ourselves, about independence, and about free circulation of information and music, are worth challenging. Not in a reactionary way of embracing DRM and antiquated hierarchies, but it is worth experimenting with some new logics that haven’t yet been tested, and might work out to be more equitable and healthy. We can’t be imprisoned by these old narratives when they clearly aren’t working out.

But even these are under attack by platforms such as facebook and instagram eating the market as grinding music into a kind of decorative social relevance glitter with which to dust their drab offerings. This is a whole other thing.

There is a huge grey→black market in the world of implied social relevance for the walled-garden streaming platforms such as Facebook and Spotify.

Austin Powell, Inside the booming black market for Spotify playlists

The rising value of Spotify playlists has spurred a new form of payola—the decades-old illegal practice of paying for a song to be broadcast on the radio—with massive amounts of money changing hands behind the scenes. An August 2015 exposé by Billboard quoted an unnamed major-label executive who claimed playlist adds were being sold for “$2,000 for a playlist with tens of thousands of fans to $10,000 for the more well-followed playlists.”

But the practice of paying for placement, as with other forms of payola before it, hasn’t died out. It’s just been remixed.

How do you turn music into money? The hype economy, is well established. We’ve all known about payola forever. There are even academic attempts to quantify it, e.g. the classic (Salganik, Dodds, and Watts 2006; Salganik and Watts 2008).

Interesting trend: Speculator copyright markets such as Royalty Exchange allow bidding on the value of copyright claims. They seem to be fairly big-ticket.

Spotify is moving towards an explicit payola scheme. Instantly I wonder about the incentive structure of this, if the company that pays you royalties also demands payments to pay your royalties, especially a near-monopoly. Details TBD.

Here are some small-ticket services for me to review at a later date for promotion across social media.

cat and girl, this record is terrible

Get people to sign up to my club of music stuff!

Substation is one such. Patreon, gumroad and bandcamp both also offer subscription systems.

I know nothing about Audius apart from this blurb?

Giving everyone the freedom to distribute, monetize, and stream unstoppable audio

The music industry generates $43 billion in revenue but only 12% goes to content artists. Furthermore,artists have minimal control over how their music is distributed and little visibility into who is streaming it. To address these and other problems faced by artists, we introduce Audius, a fully decentralized music streaming protocol built with public blockchain infrastructure and other decentralized technologies. Audius allows artists to distribute to and get paid directly from their fans, and is comprised of the following components: