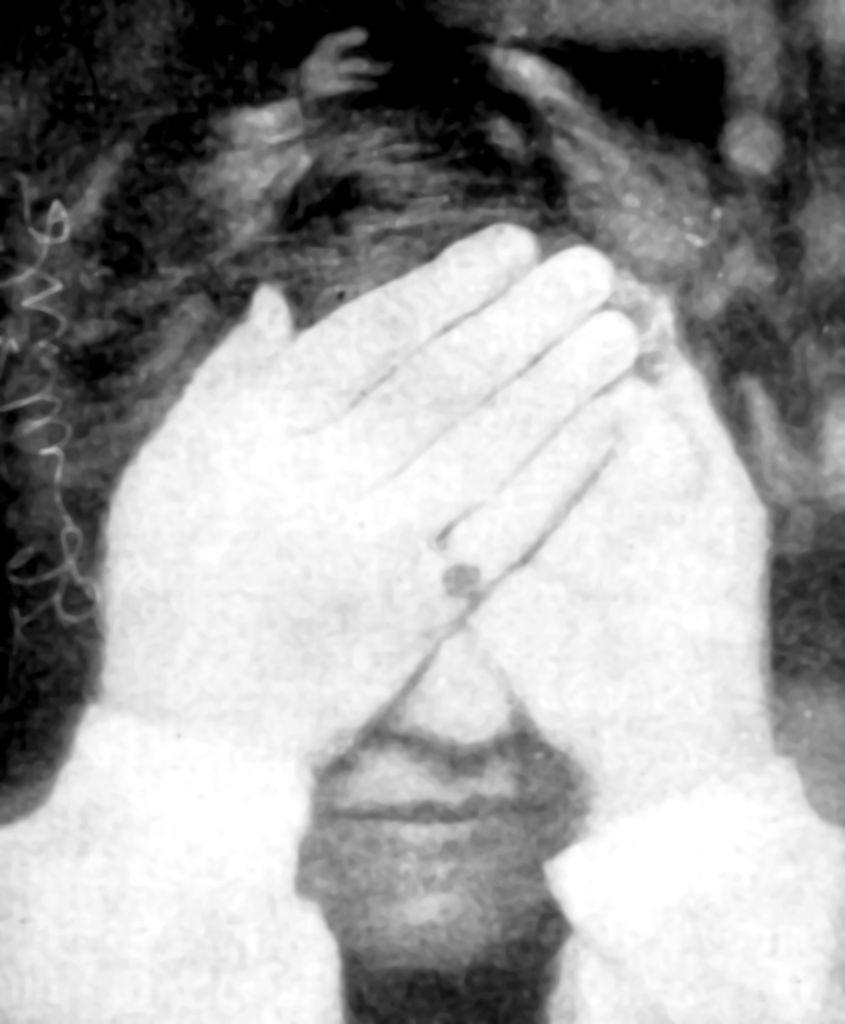 Theirtube is a Youtube filter bubble simulator that provides a look into how videos are recommended on other people’s YouTube. Users can experience how the YouTube home page would look for six different personas. Each persona simulates the viewing environment of real Youtube users who experienced being inside a recommendation bubble through recreating a Youtube account with a similar viewing history. TheirTube shows how YouTube’s recommendations can drastically shape someone’s experience on the platform and, as a result, shape their worldview. It is part of the Mozilla Creative Media Awards 2020 — art and advocacy project for examining AI’s effect on media and truth, developed by Tomo Kihara . 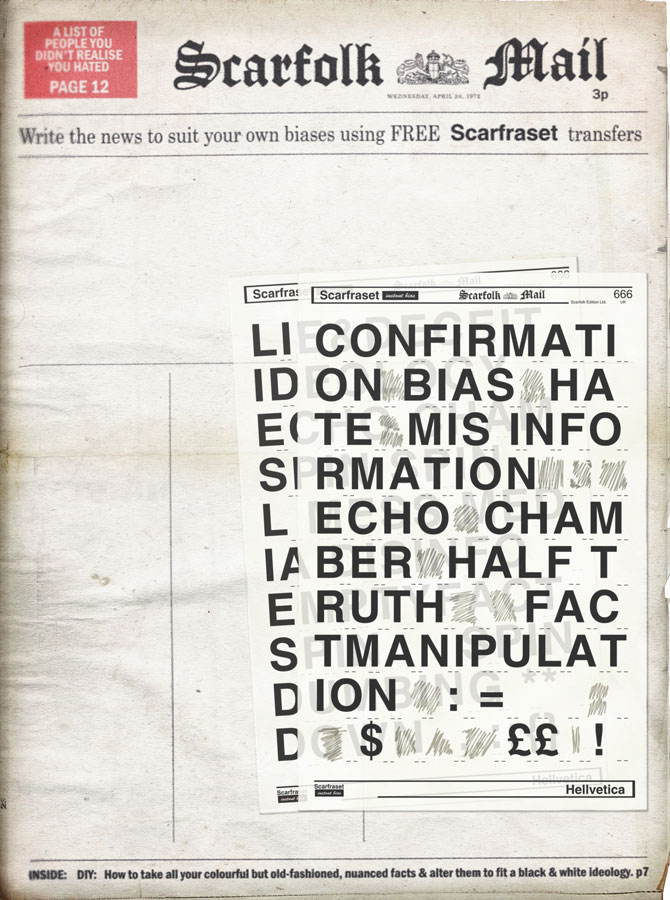 “Data journalism” has interesting tools. But do people care about data? Are facts persuasive? As Gilad Lotan anecdotally illustrates, merely selecting facts can get you your own little reality, without even bothering to lie. 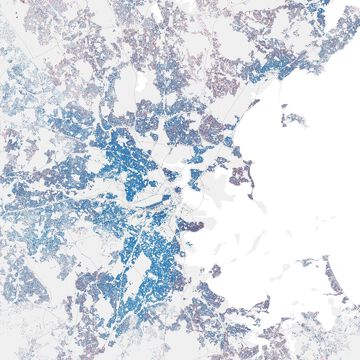 Let’s get real here; for the moment, reasoned engagement with a shared rational enlightenment doesn’t dominate the media. Bread and circuses and kompromat and gut-instinct do.

The Conversation Has Never Been Wider

Broadening access doesn’t mean that everybody has the experience that I, privileged person, had in the discourse. Broadening it means that we are all equally uncomfortable, right? That’s actually what pluralism and plurality is. It isn’t that everybody is going to come in and have the same comforts that privilege and exclusion had extended to a small group of people. It’s that now everybody sits at the table, and nobody knows the exact right thing to say about the other people.

Well, that’s fair. That means we all now have to be thoughtful. We all have to consider, oh, wait a minute. Is that what we say in this room? We all have to reconsider what the norms are, and that was the promise of like expanding the discourse, and that’s exactly what we’ve gotten. And if that means that I’m not sure about letting it rip on a joke, that’s probably a pretty good thing.

For a false binary, try Nick Cohen, Trump’s lies are not the problem. It’s the millions who swallow them who really matter:

Compulsive believers are not just rednecks. They include figures as elevated as the British prime minister and her cabinet. […]

Mainstream journalists are almost as credulous. After decades of imitating Jeremy Paxman and seizing on the trivial gaffes and small lies of largely harmless politicians, they are unable to cope with the fantastic lies of the new authoritarian movements. When confronted with men who lie so instinctively they believe their lies as they tell them, they can only insist on a fair hearing for the sake of “balance”. Their acceptance signals to the audience the unbelievable is worthy of belief.

This is a shallow causal analysis; However, thinking about the credulity of people in power is interesting.

Alexis Madrigal, What Facebook Did to American Democracy Buzzfeed, Inside the partisan fight for your newsfeed:

The most comprehensive study to date of the growing universe of partisan websites and Facebook pages about US politics reveals that in 2016 alone at least 187 new websites launched, and that the candidacy and election of Donald Trump has unleashed a golden age of aggressive, divisive political content that reaches a massive amount of people on Facebook.

Thanks to a trinity of the internet, Facebook, and online advertising, partisan news websites and their associated Facebook pages are almost certainly making more money for more people and reaching more Americans than at any time in history. In some cases, publishers are generating hundreds of thousands of dollars a month in revenue, with small operations easily earning five figures thanks to one website and at least one associated Facebook page.

At its root, the analysis of 667 websites and 452 associated Facebook pages reveals the extent to which American online political discourse is powered by a mix of money and outrage.

It is often asserted that friends and acquaintances have more similar beliefs and attitudes than do strangers; yet empirical studies disagree over exactly how much diversity of opinion exists within local social networks and, relatedly, how much awareness individuals have of their neighbors’ views. This article reports results from a network survey, conducted on the Facebook social networking platform, in which participants were asked about their own political attitudes, as well as their beliefs about their friends’ attitudes. Although considerable attitude similarity exists among friends, the results show that friends disagree more than they think they do. In particular, friends are typically unaware of their disagreements, even when they say they discuss the topic, suggesting that discussion is not the primary means by which friends infer each other’s views on particular issues. Rather, it appears that respondents infer opinions in part by relying on stereotypes of their friends and in part by projecting their own views. The resulting gap between real and perceived agreement may have implications for the dynamics of political polarization and theories of social influence in general.

A central idea in marketing and diffusion research is that influentials— a minority of individuals who influence an exceptional number of their peers— are important to the formation of public opinion. Here we examine this idea, which we call the “influentials hypothesis,” using a series of computer simulations of interpersonal influence processes. Under most conditions that we consider, we find that large cascades of influence are driven not by influentials but by a critical mass of easily influenced individuals. Although our results do not exclude the possibility that influentials can be important, they suggest that the influentials hypothesis requires more careful specification and testing than it has received.

On the right, audiences concentrate attention on purely right wing outlets. On the left and center audiences spread their attention broadly and focus on mainstream organizations. This asymmetric pattern holds for the linking practices of media producers. Both supply and demand on the right are insular and self-focused. On the left and center they are spread broadly and anchored by professional press.

These differences create a different dynamic for media, audiences, and politicians on the left and right.

We all like to hear news that confirms our beliefs and identity. On the left, outlets and politicians try to attract readers by telling such stories but are constrained because their readers are exposed to a range of outlets, many of which operate with strong fact-checking norms.

On the right, because audiences do not trust or pay attention to outlets outside their own ecosystem, there is no reality check to constrain competition. Outlets compete on political purity and stoking identity-confirming narratives. Outlets and politicians who resist the flow by focusing on facts are abandoned or vilified by audiences and competing outlets. This forces media and political elites to validate and legitimate the falsehoods, at least through silence, creating a propaganda feedback loop. …

The highly asymmetric pattern of media ecosystems we observe on the right and the left, despite the fact that Facebook and Twitter usage is roughly similar on both sides, requires that we look elsewhere for what is causing the difference.

Surveys make it clear that Fox News is by far the most influential outlet on the American right — more than five times as many Trump supporters reported using Fox News as their primary news outlet than those who named Facebook. And Trump support was highest among demographics whose social media use was lowest.

Our data repeatedly show Fox as the transmission vector of widespread conspiracy theories.

In other results, we estimate that removing Fox News from cable television during the 2000 election cycle would have reduced the overall Republican presidential vote share by 0.46 percentage points. The predicted effect increases in 2004 and 2008 to 3.59 and 6.34 percentage points, respectively. This increase is driven by increasing viewership on Fox News as well as an increasingly conservative slant.

Here is a ramble that crosses over into psephology, by Tanner Greer 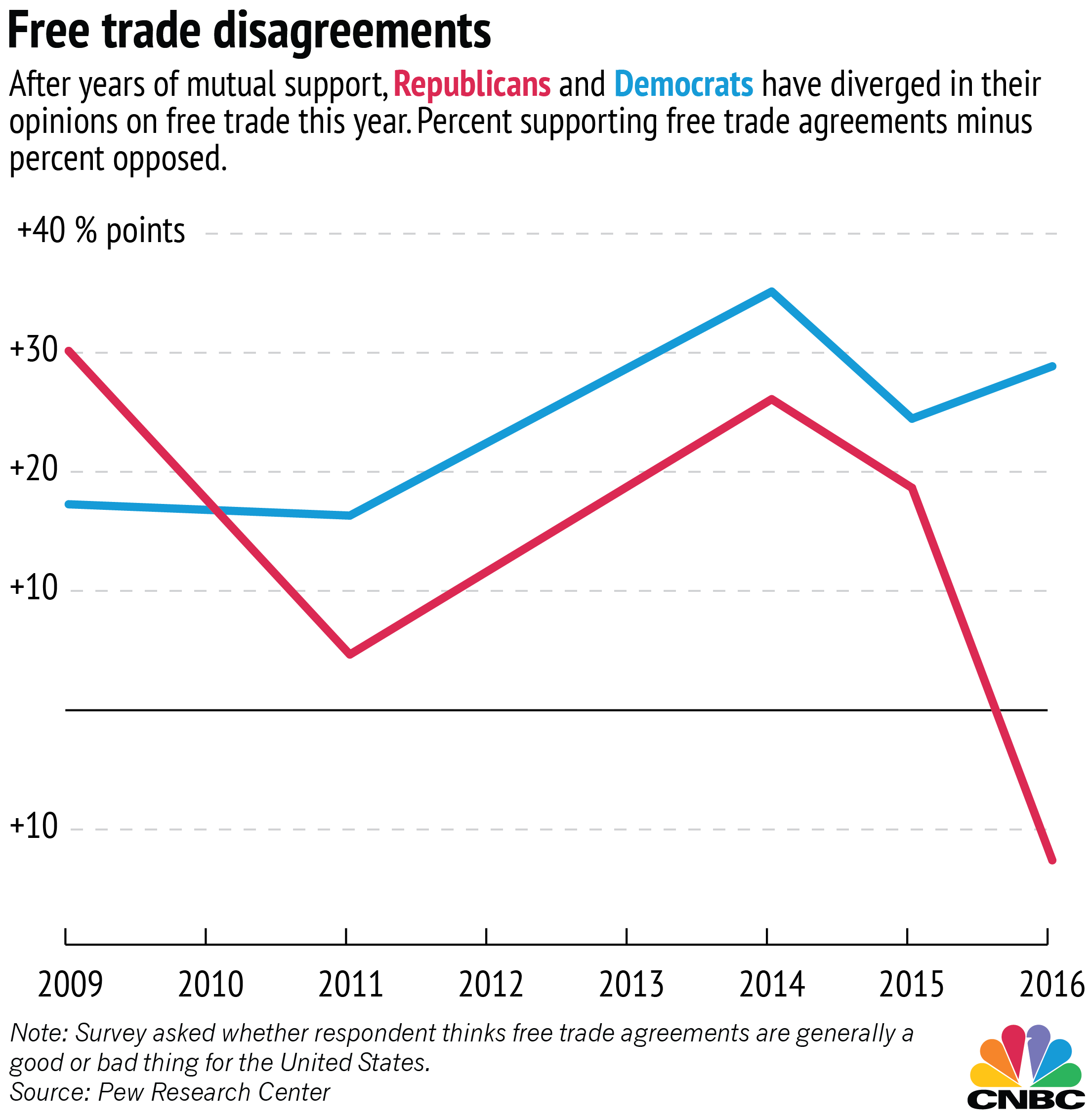 Witness an incredible transformation! In less than two years an entire wing of the Republican Party metamorphosed from a collection of free trade zealot into a cartel of pro-tariff troglodytes! Why did this happen? Did the Trump administration dismantle a national system of spies, censors, and political prisoners? Were the Republican masses really anti-trade all along, but afraid to proclaim their opinion until their man was in power?

Political convictions do not work the way most people think they do.

“It is difficult to get a man to understand something,” quipped Upton Sinclair, “when his salary depends upon his not understanding it!” [3] It is easy to see the truth behind this statement. But also easy to see are its limitations. Very few Americans have a direct financial stake in same-sex marriage, nuclear power, the size of the American military, or a balanced budget. The number of Americans whose salary is dependent on a particular understanding of affirmative action or global warming is very small. Even when an issue of public importance has a direct and undeniable impact on household finances (say tax rates or health care), members of that household will often vote against the party whose policies would save them the most money. If asked to guess an American’s opinion on tax cuts, you are would be better off knowing whether that person is pro-life or pro-choice than you would knowing their income.

I have not yet seen how much real analysis is done in (Garimella et al. 2018) about which is is claimed:

The study identifies three essential roles for Twitter users. Partisan users both consume and produce content with only a one-sided leaning and enjoy high appreciation measured by both network centrality and content endorsement. Gatekeepers have a central role in the formation of echo chambers because they consume content with diverse leanings but choose to produce only content with a one-sided leaning. Bipartisan users produce content with both leanings and make an effort to bridge the echo chambers, but they are less valued in their networks than their partisan counterparts.

A methodology that clusters into three discrete groups smells funky but I really need to read the paper to see what they actually did.

So let’s say you’re a media owner who’s “all business,” caring only for the bottom line, looking to keep shareholders and owners happy, buy yourself some expensive houses, and/or get yourself or your friends re-elected. Without a doubt, the journalists who are prepared to tell readers the truth—even about you and your friends!—can only be a hindrance, and are best shut up or rid of, to the extent possible.