Risk, perception of. How humans make judgements under uncertainty, as actors able to form beliefs about the future. 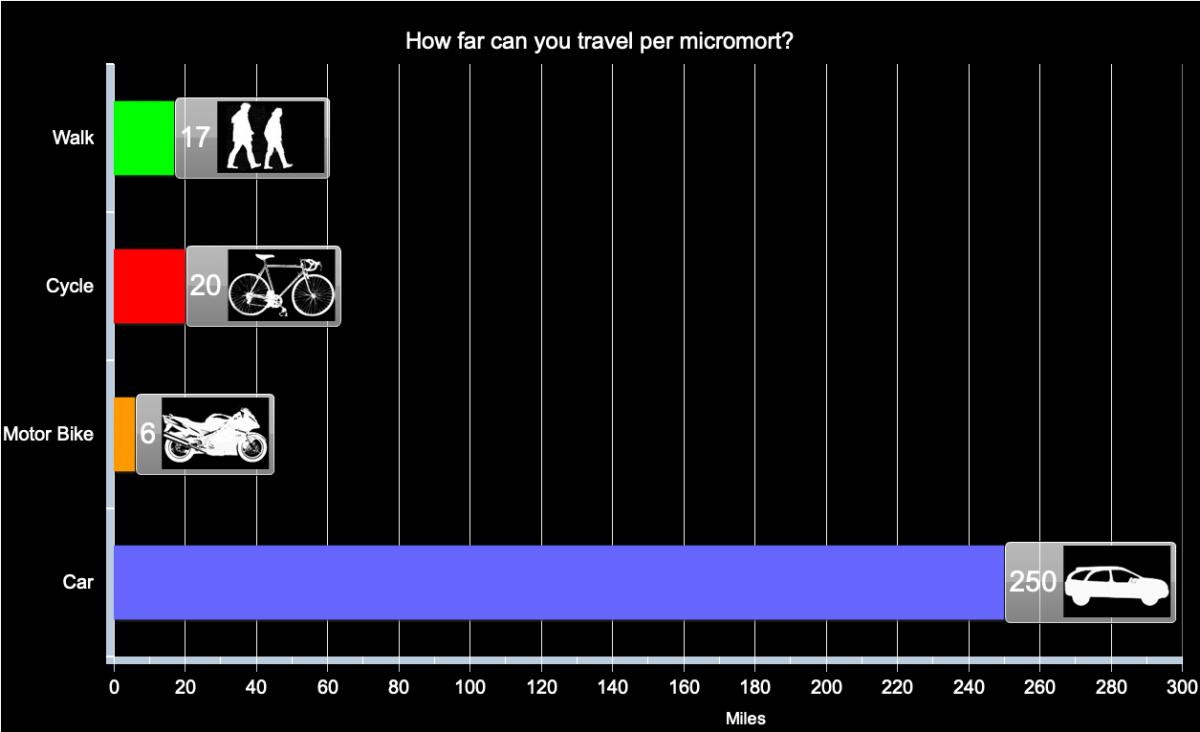 A Micromort. is a 1 in a million chance of dying from misadventure. It has a natural interpretation:

We can also consider the 18,000 people who died from "external causes" in England and Wales in 2008. That’s those people out of the total population of 54 million who died from accidents, murders, suicides and so on (see the Office of National Statistics website for more information). This corresponds to an average of

micromort per day, so we can think of a micromort as the average "ration" of lethal risk that people spend each day, and which we do not unduly worry about.

Micromorts are also being used to compare death risks in different countries.

A microlife is a measure of actuarial life risk, telling you how much of your statistical life expectancy (from all causes) that you are burning through.

many risks we take don’t kill you straight away: think of all the lifestyle frailties we get warned about, such as smoking, drinking, eating badly, not exercising and so on. The microlife aims to make all these chronic risks comparable by showing how much life we lose on average when we’re exposed to them:

a microlife is 30 minutes of your life expectancy

Spiegelhalter is a wizard of risk communication. For example, David Spiegelhalter gives this perspective on COVID-19:

So, roughly speaking, we might say that getting COVID-19 is like packing a year’s worth of risk into a week or two.

Heuristic and biases in risk perception

and what definitions of each of those words would be required to make this work.

Economists often seem to really want the relationship between people’s empirical behaviour in the face of risk and the decision-theoretically-optimal strategy to be simple, in the sense of having a mathematically simple relationship. The evolutionarily plausible kind of simplicity of the idea that it is our messy lumpy Pleistocene brains worry about great white sharks more than loan sharks because the former have more teeth and other such approximate not-too-awful heuristics.

Assigned reading 1: The Beast Upon Your Shoulder, The Price Upon Your Head.

Health information leaflets are designed for those with a reading age of 11, and similar levels of numeracy. But there is some reasonable evidence that people of low reading age and numeracy are less likely to take advantage of options for informed choice and shared decision making. So we are left with the conclusion -

Health information leaflets are designed for people who do not want to read the leaflets.

If you’re like most people, you don’t have a preference between B1 and W1, nor between B2 and W2. But most people prefer B1 to B2 and W1 to W2. That is, they prefer “the devil they know”: They’d rather choose the urn with the measurable risk than the one with unmeasurable risk.

Ellsberg offered this as evidence of “ambiguity aversion,” a preference in general for known risks over unknown risks. Why people exhibit this preference isn’t clear. Perhaps they associate ambiguity with ignorance, incompetence, or deceit, or possibly they judge that Urn 1 would serve them better over a series of repeated draws.

Ergodicity economics preferes not to regard this as a bias but as a learning strategy. How does that work then? I don’t know anything about it but it looks a little… cottage?

Mark Buchanan, How ergodicity reimagines economics for the benefit of us all:

The view of expected utility theory is that people should handle it by calculating the expected benefit to come from any possible choice, and choosing the largest. Mathematically, the expected ‘return’ from some choices can be calculated by summing up the possible outcomes, and weighting the benefits they give by the probability of their occurrence.

This inspired LML efforts to rewrite the foundations of economic theory, avoiding the lure of averaging over possible outcomes, and instead averaging over outcomes in time, with one thing happening after another, as in the real world.

I am guessing some kind of online learning type setting, minimising regret over possibly non-stationary data or something? 🤷‍♂

There is an introduction by Jason Collins which puts it in layperson terms.