The sunniest mortgage farm in the Southern Hemisphere! Sydney. Australia’s oldest city. Fetid, fun, messy, corrupt, uptight, gorgeous, vapid. I love this place, but probably I do not love it enough to pay the fee to stay here forever.

On a trajectory to boring

From police horses in pubs, to $400 fines for riding on the footpath to disgusting old houses with actual mouldy dead bodies in them that sell for $1.1 million at auction, Sydney is already streets ahead in 2016’s Shittest City in Australia award. The lockouts have torched the inner city’s once-vibrant nightlife, Westconnex is going to turn some of the city’s most liveable suburbs into one giant spaghetti junction, and the state government’s made it even easier for little old ladies to gamble away their retirement savings by approving Barangaroo, James Packer’s latest giant, dick-shaped monument to himself.

…The future of Sydney is gyms. In ten years, everything will be a gym. The Harbour Bridge will be a gym. The Domain will be a gym. Alan Jones will be a gym. Who needs a nightspot where one of history’s great bands might play a cheeky gig on a Saturday night when you can go do synchronised arm exercises with office managers while a would-be army instructor screams at you over a Pitbull EDM remix?

The terrible thing is, since COVID-19 closed my gym, this idea does not sound so bad any moe.

To put that rant another way, Sydney is choked by real estate pollution.

Passive-aggressive psychogeography is a local specialty. Watch as the local topological contortions are ground into undifferentiated suburbia. 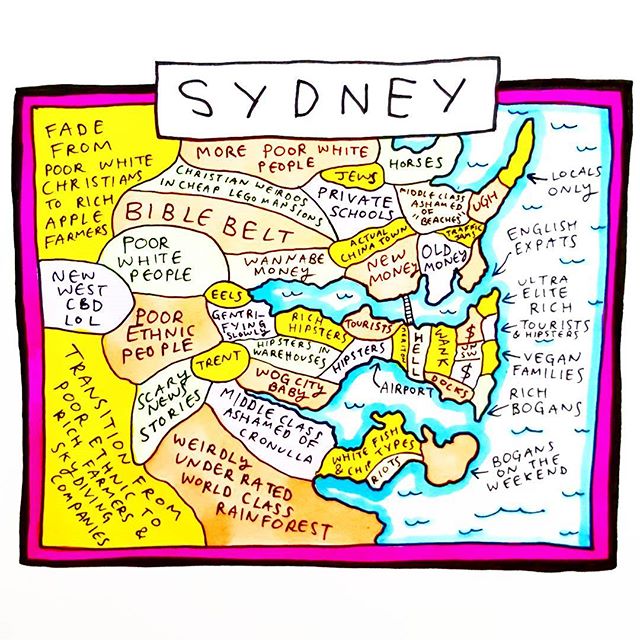 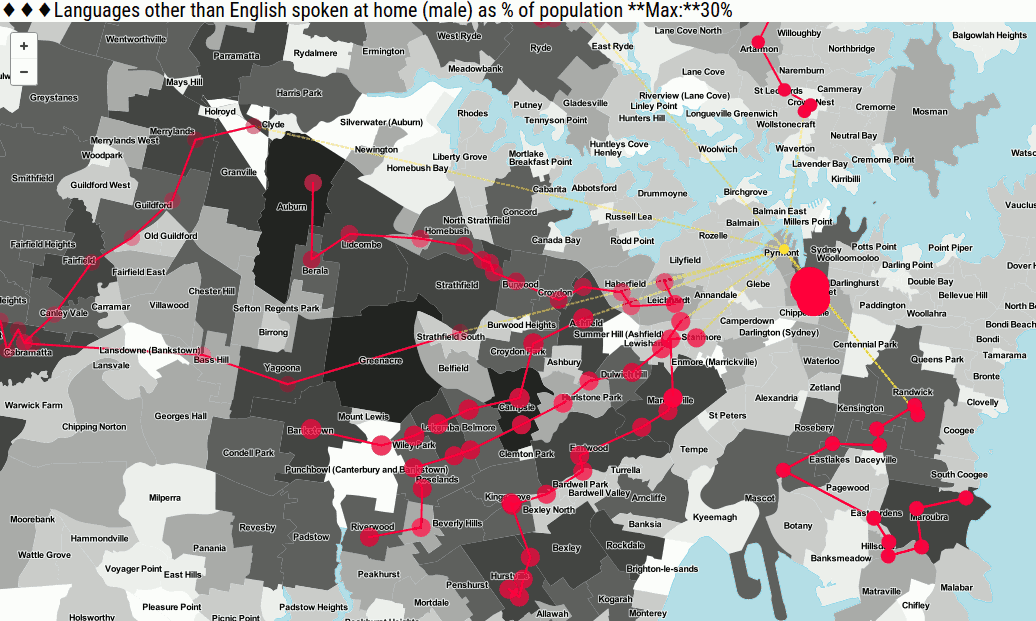 Map My Sydney from the Map My Environment, tracks pollution levels of various toxins of note.

How about Illustrated Sydney News? Get some sauna! The Australian Sweat Bathing association advocates for sauna culture in Australia.

There are lots of national parks and wilderness reserves. They are typically really good. The ones that are easiest to get to are listed in Sydney Hiking Trips (formerly Sydney Train Walks).

Compost revolution is a composting (skill|resource) sharing community Not Sydney-specific, but Sharewaste.com is the social network I use to find places to compost my food scraps. A set of handsome historical Australian wildflower tiles! Buy this as a sticker or a t-shirt why not?

Sydney we sometimes call Retirementland because it highly polluted by real estate, in the sense that things that do no maximise the investment value of living space are unlikely to happen here, whcih more or less corresponds to being a nice place for retirees but not anyone else. Sydney is famously hostile to parties:

I’d overheard some Spaniards calling Sydney ‘El Cementerio’ — ‘The Cemetery’ — and there was something sepulchral about the silent spaces. That look of desolation distinctive to the top of Oxford Street (the civic pockmark of empty storefronts and For Lease signs) was spreading all over the city. Taylor Square could have been hosting a memorial service, and in a way it was. Already the iconic Flinders Hotel, the Exchange Hotel — home to a number of venues — and Taxi Club had closed down, and the closest nightclub was to be replaced with a government-funded “family-friendly” cycle hub.

Another great phrasing of this problem:

“Noël, noël is a great nostalgic Christmas carol that reminds me of a more simple time before coward punches, but it really needs to be enjoyed in moderation. It’s interrupting my small town BBC murder mysteries. I’m a caucasian post-war Australian. I’ve never had to make a compromise in my life, and I don’t plan on starting now.” Frontyard projects (frontyard wiki, Frontyard slack) is a singular thing; an arts space in the Inner West of Sydney which collects assorted missing pieces of medium-density living; A usable writing space a collective library, a shared garden, rooms for thinking in etc.

Sydney Alliance is a miscellaneous actor.

The Tenant’s Union has many campaigns.

Over 2 million people rent their homes in NSW. That’s one in every three households. Many of these are families, as well as an increasing number of older people, and people sharing homes. […] But the reality is that rental laws in NSW aren’t fair. Renters don’t experience the same security and comfort in their homes as homeowners. Many are constantly worried about losing their home and feel they are powerless to assert their rights.

I am not a fan of this framing of the problem. Yes, renting a thing is not as certain as owning a thing, and that is probably definitional. The question is: does the system as it stands make it worse than it needs to be? Does it make, for example, renting especially unpleasant as a kind of dark subsidy to an overgrown property-speculation sector? I think it likely.

The gradualist Tenant’s Union does not exactly grab me with their campaigning strategy to change this. They do not have the muscular cashed-up prestige presence of the real-estate lobby, nor a scrappy underdog guerilla campaigning ethos, or a dynamic media presence. Perhaps Better Renting, schooled in a more modern, disruptive, social-media-savvy era, might be the goods.

This is one of the Sydney Alliance campaigns too:

Westconnex Action Group and Wendy Bacon’s reportage cover some of the construction pile-on that is Sydney at the moment.

Hoestly though, most of these campaigns do not have much money or power backing them; realistically, we should just go somewhere else and maybe come back later if the market collapses.

Also, why not the Inner West Tool Library?.