the new version of Evolution mail is motorized

Being smarter about how I read my email on linux. Especially, less-awful-UX in email clients. We have had email for more than 50 years (happy golden anniversary) so surely this is not too bad, right? Haha jk of course we know it’s depressing, and worse, it seems to be one of those problems that I cannot even solve with money. At this point I would happily throw disconcertingly large amounts of money at this problem to make it go away but there is nowhere I can find to throw it.

Note that google mail has obviously done some UX innovation, but I’m not happy with their owning intimate details of my correspondence, so their email client is dead to me. Shameless clones of the google email experience that do no rest upon giving my data up to google are of interest, however.

The real challenge is Linux. On Linux you can choose between various dissatisfactions:

The rule for Linux mail clients is everyone hates them all and no-one has improved substantially over the interface designs of the 90s, excepting those that have but have missed out something else essential in the process. Every alternative has a faintly broken-hearted air, as if the authors were briefly determined to do it right this time before giving up like all the others. Nonetheless all the mediocre options are… there, still drifting along. They are mostly still mostly functional and somewhat buggy, as they have been since their hearts broke. Pace jwz, I do not believe that Zawinski’s Law of Software Envelopment applies any longer. The dominant dynamic now is better summarized

Every program that expands until it can read mail competently will be replaced by one which cannot.

In practice I have managed to survive with a mixture of Mailspring and Geary and Evolution for, respectively, searching emails, accessing contacts, and configuring the settings. Also using just Evolution is fine, I guess, if you don’t like happiness. Thunderbird is also a solidly mediocre alternative that kind of blends all the pluses and minuses of the competition into undifferentiated tolerability. That is what I currently use.

tl;dr: Thunderbird is able to adequately send and receive mail with the height of convenience circa 2005.

Update Thunderbird 91 released 2021-08-11, is a substantive revamp of much of Thunderbird. Is it less terrible now? Have not yet tried.

Thunderbird is the classic Mozilla-backed mail client that I’ve always found aesthetically grating. However, it works across every mail server I have tried, so there is a return on tolerating its low-key irritations. It stores data in its own cross-platform thunderbird database, so migration is easy between platforms.

The weird foibles, though, are many. For example, search for messages is confusing. There are two boxes, filter and search, with an obscure relationship that I am too stubborn to google because I feel it should be obvious. 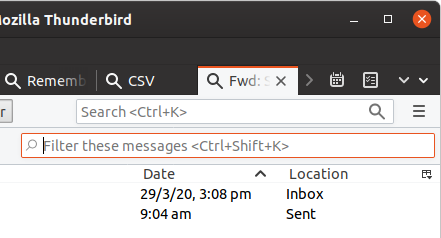 The default search is ordered by something called “relevance” which seems in practice to mean “please show me first some arbitrary irrelevant email from 2017”. I guess that could mean that truly is a search ordered by relevance, just in the opposite-to-useful-order. Or that the language model is bad. Or that Thunderbird has been infiltrated by agents of inbox zero.

There are other minor irritations too numerous to recount, but all survivable. This is a completely functional mail client which handles all the oddball requirements of my various servers, but does not care enough to make it look easy. Thunderbird even gets contact and calendar support if you treat it just so. This option is unpleasant but OK.

tl;dr: This looks good so why have I heard so little about it? Oh, because for all that this product is pleasing to the eye it is missing address book and calendar integration.

Mailspring is a web-tech-backed GPL3 mail client. It has a freemium feature set for fancy people at USD8/month. The interface design is more modern than most of the options here.

The app mostly does what it says. Sometimes it freezes and implodes, but does not seem to have lost data that way yet.

However the lack of calendar/contact integration is annoying. I get invited to things by email pretty often. Would suit a hermit who never leaves the house, or someone who memorises email addresses and phone numbers.

tl;dr: Tired of those same old annoyances of Evolution? This half-finished alternative supplements those with some new ones.

Geary seems to be an attempt to do over and modernise Evolution but I am nervous that it keeps the flakiest part of Evolution, the evolution data server, as a backend storage. Nonetheless that probably means it has relatively good system integration compared to Thunderbird? And a better UI than Evolution?

Search just doesn’t work. It either hangs forever, or fails to find emails that I can see with my own eyeballs right there.

Yo, I heard your email program was too complicated, so I wrote an additional different one that is half as complicated with different keyboard shortcuts which you can use at the same time.

Don’t you mean that I use instead?

Evolution is the OG GNOME mail client. It supports GPG natively for what that is worth, so if we can find two people who use it, those folks can send messages to each other that way I guess. It has powerful and flexible configuration and good integration into GNOME desktop, and Microsoft Exchange support and icloud support and indeed everything support. That is to say, it is featureful. It would like me to know how featureful it is. The UI is cluttered with a lot of inside-baseball stuff. What happens if I click on a message that was deleted on the server?

User interactions are not intuitive but must be googled. Here is a case study: I often want to view only flagged messages. It is not obvious how to filter to flagged messages. The short answer is use a search folder. The conditions they suggest are [Follow-up] [is Flagged], which did not work for me. For me, what worked was [Status] [is] [important] (crucially, not [Label] [is] [important] which does… nothing?)

It is a weird process to create the folder, which reflects the general UX of this program, so I will relate it. First, I go to a mail folder. Then I click search1 Then I click Advanced search. Then the search dialogue pops up. I must not click OK, but save then OK, or I start again. Now I click on [Search] [create saved folder from search]. NOW I have a saved search. Somehow 90 minutes passed out while I worked that out.

There are a thousand small frictions. Here are some more, because I appear to be ranting now.

Forwarding messages? Technically possible, but only if I like the WHOLE THING to be sent as an attachment which opens in a separate window, which is a small annoyance but annoys me since I like to reply to emails line-by-line sometimes. I think I get to that by replying then changing the to: address? Actually, on reflection that is not crazy. OK Evolution, you can have this one.

Ultimately, I do not trust Evolution merely because it is passive-aggressive but because it seems fragile. The backend process eds, a.k.a. Evolution data store, intermittently leaks memory or cpu in a way that fills me with dread for the code quality. That CPU usage is by a background process that is hard to disable; Even when I am not running the Evolution client, a substantial proportion of my battery goes into its obsessive syncing. I found somewhere on the internet that the problem can be improved if I periodically delete ~/.cache/evolution/addressbook. The need for such a weird hack is a red flag. UPDATE has not crashed recently.

tl;dr: Looks great but too much hunting-and-pecking with the mouse, and vaguely suspect.

Bluemail claims to modernize various features of the email workflow. Commercial (android/macos/linux/windows/ios). Free for individual use.

All else being equal, I prefer open source apps for handling confidential data such as emails (especially when the company that makes it is in a surveillance state like the USA). That preference is about transparency, not price. I am, as presaged, happy to fork out money for a quality email experience. Bluemail is not an open source app. However, all else is not equal, and the open source options are terrible, so I will suppress those transparency qualms to give this app a try. Early indications are not without promise; the company support staff responded extremely rapidly to my first support ticket, so I am feeling well-disposed towards them.

OK, so new summary: Dubious privacy, shiny interface which is easy for beginner but hard for regular users. This app is boomer-bait.

Sylpheed is a light, apparently simple mail client that I see recommended where people are complaining about Evolution being slow. It seems to be intermittently maintained, and to use antiquated technology. Claws is AFAICT a fork and has exactly the same selling points except more modern (?) and less intermittent development. It looks like neither support any kind of rich text formatting when writing emails. But to be fair, HTML email composition has only been around since 1996, so it is understandable that the developers don’t wish to leap in too soon to this ephemeral new “world wide web” fad. They can sit this one out and instead ride the next hype cycle, and play the long game. Fun fact: all tech trends converge upon a single ultimate mega trend which is the entropic heat death of the universe. Truly future proof software targets thermal equilibrium.

tl;dr: On the slightly-too-minimal side of admirably minimal for now.

Kube is a minimalist client built by kolabnow. It supports encryption, and is certainly fast and simple. It doesn’t do certain things one would like, such as multiple mail accounts, or even one mail account with an external address book server. But the simple interface is sooooo soothing, it’s a tranquil shibui meditation in there.

If this email gains some kind of integration to my calendar (nice) or my address book (essential) I will revisit it.

The KDE client is kmail. Although I am not ideologically opposed to KDE any more than I am to GNOME, they are both awful in different ways, it is messy when you try to install big foundational apps from both KDE and GNOME, so I have not installed this particular one and thus cannot vouch for it.

Nonetheless, between this and the Nautilus reasonable difference of opinion I detect a good argument for choosing KDE desktop over Gnome desktop. My main concern would be that I have no assurances that the constellation of KDE annoyances is not similarly annoying.

Yes, I could use a command-line interface for sending and receiving mail. That would be very artisinal of me. But I am speaking in the subjunctive, as if I have not done this. Hah! I was text mode email user from 1994 to 2004. IIRC I started with pine them moved to mutt. It was certainly functional, and reliable. I am not a fan; I was spending half my time managing attachments and failing to find messages. This is not for me, in the year 2021.

For completeness I should mention that mutt can be made less bad if you add a search plugin to it. Here are some links about that.

Bogofilter and Spamassassin are two eminent spam filters that may be shared by various of these mail clients, including evolution and claws. If you are hedging your bets on mail clients sharing spam filtering across them might be is useful.

I would like to share my mail contacts with my iPhone. Possible, since icloud supports generic standards such as CalDAV. Unpleasant email client Evolution does a good job of autodiscovering the whole config for an apple icloud-backed account if you put the following servers in the server box: imap.mail.me.com, imap.mail.me.com, https://caldav.icloud.com and https://contacts.icloud.com. Thunderbird is fiddlier.