Science, sociology and institution design for 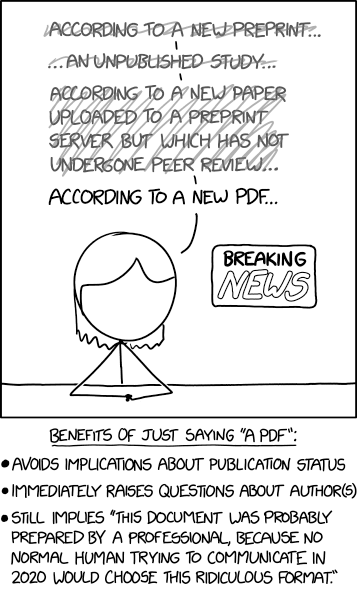 Upon the thing that academic publishing is supposed to do: further science. Reputation system and other mechanisms for trust in science, a.k.a. collective knowledge for reality itself.

I would like to consider the system of peer review, networking, conferencing, publishing and acclaim and see how closely it approximates an ideal system for uncovering truth, and further, imagine how we could do better. But I do not do that right now, I just collect some provocative links to that theme, in hope of time for more thought later.

Does Science advance one funeral at a time?

Andrew Marzoni, Academia is a cult.

So why did Wolfram announce his ideas this way? Why not go the traditional route? “I don't really believe in anonymous peer review,” he says. “I think it’s corrupt. It’s all a giant story of somewhat corrupt gaming, I would say. I think it’s sort of inevitable that happens with these very large systems. It’s a pity.”

So what are Wolfram’s goals? He says he wants the attention and feedback of the physics community. But his unconventional approach—soliciting public comments on an exceedingly long paper—almost ensures it shall remain obscure. Wolfram says he wants physicists’ respect. The ones consulted for this story said gaining it would require him to recognize and engage with the prior work of others in the scientific community.

And when provided with some of the responses from other physicists regarding his work, Wolfram is singularly unenthused. “I’m disappointed by the naivete of the questions that you’re communicating,” he grumbles. “I deserve better.”

Here is an interesting edge case in peer review and scientific reputation. Adam Becker, Junk Science or the Real Thing? ‘Inference’ Publishes Both. As far as I'm concerned, publishing crap in itself is not a catastrophic. A process that fails to discourage crap would be bad.

Gelman, Andrew. 2011. “Experimental Reasoning in Social Science.” In Field Experiments and Their Critics.

Thurner, Stefan, and Rudolf Hanel. 2010. “Peer-Review in a World with Rational Scientists: Toward Selection of the Average.”