Replication crises, P-values, bitching about journals, other debilities of contemporary science at large Multiple testing across a whole scientific field, with a side helping of biased data release and terrible incentives.

On one hand we hope that journals will help us find things that are relevant. On the other hand, we would hope the things they help us find are actually true. It’s not at all obvious how to solve these kind of classification problems economically, but we kind of hope that peer review does it.

To read: My likelihood depends on your frequency properties.

Keywords: “file-drawer process” and the “publication sieve”, which are the large-scale models of how this works in a scientific community and “researcher degrees of freedom” which is the model for how this works at the individual scale.

This is particularly pertinent in social psychology, where it turns out the there is too much bullshit with \(P\leq 0.05\). 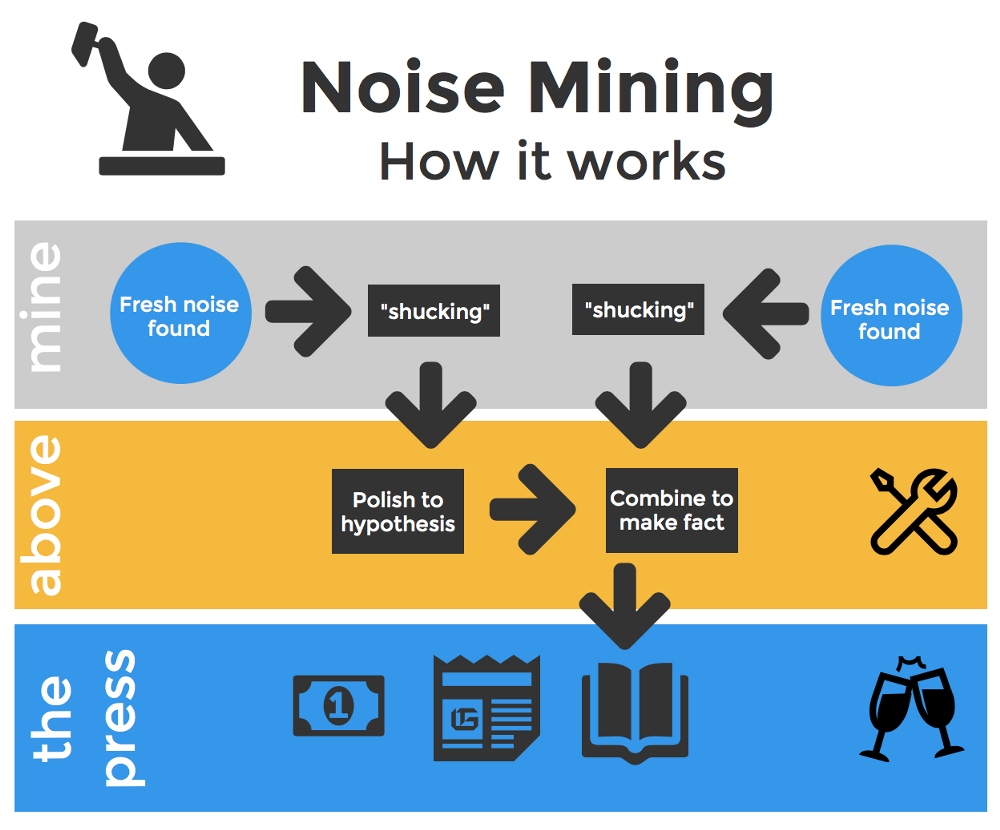 We’re out here everyday, doing the dirty work finding noise and then polishing it into the hypotheses everyone loves. It’s not easy. —John Schmidt, The noise miners

Sanjay Srivastava, Everything is fucked, the syllabus. Serious though this is, there is also something more specifically pernicious about the replication crisis in psychology. We saw that the bias in psychological research is in favour of publishing exciting results. An exciting result in psychology is one that tells us that something has a large effect on people’s behavior. And the things that the studies that have failed to replicate have found to have large effects on people’s behavior are not necessarily things that ought to affect people’s behaviour, were those people rational. Think of the studies I mentioned above: a mess makes people more prejudiced; a random assignment of roles makes people sadistic; a list of words makes people walk at a different speed; a strange pose makes people more confident. And so on.

Uri Simonsohn’s article on detecting the signature of p-hacking is interesting.

Some might say, just fix the incentives, but apparently that is off the table because it would require political energy. There is open notebook science, that could be a thing.

Failing the budget for that… pre-registration?

Pre-registration is easy. There is no single, universally accepted, way to do it.

But should you in fact pre-register?

Morally, for the good of science, perhaps. But not in the sense that it’s something that you should do if you want to progress in your career. Rather the opposite. As argued by Ed Hagen, academic success is either a crapshoot or a scam:

The problem, in a nut shell, is that empirical researchers have placed the fates of their careers in the hands of nature instead of themselves. […]

Academic success for empirical researchers is largely determined by a count of one’s publications, and the prestige of the journals in which those publications appear […]

the minimum acceptable number of pubs per year for a researcher with aspirations for tenure and promotion is about three. This means that, each year, I must discover three important new things about the world. […] […]

Let’s say I choose to run 3 studies that each has a 50% chance of getting a sexy result. If I run 3 great studies, mother nature will reward me with 3 sexy results only 12.5% of the time. I would have to run 9 studies to have about a 90% chance that at least 3 would be sexy enough to publish in a prestigious journal.

I do not have the time or money to run 9 new studies every year. 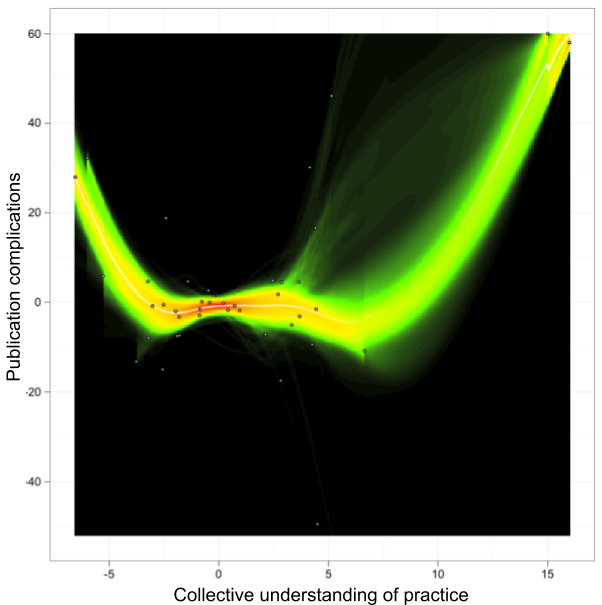 So, when does a certain practice—e.g., a study design, a way to collect data, a particular statistical approach—"succeed" and start to dominate journals?

It must be capable of surviving a multi-stage selection procedure: 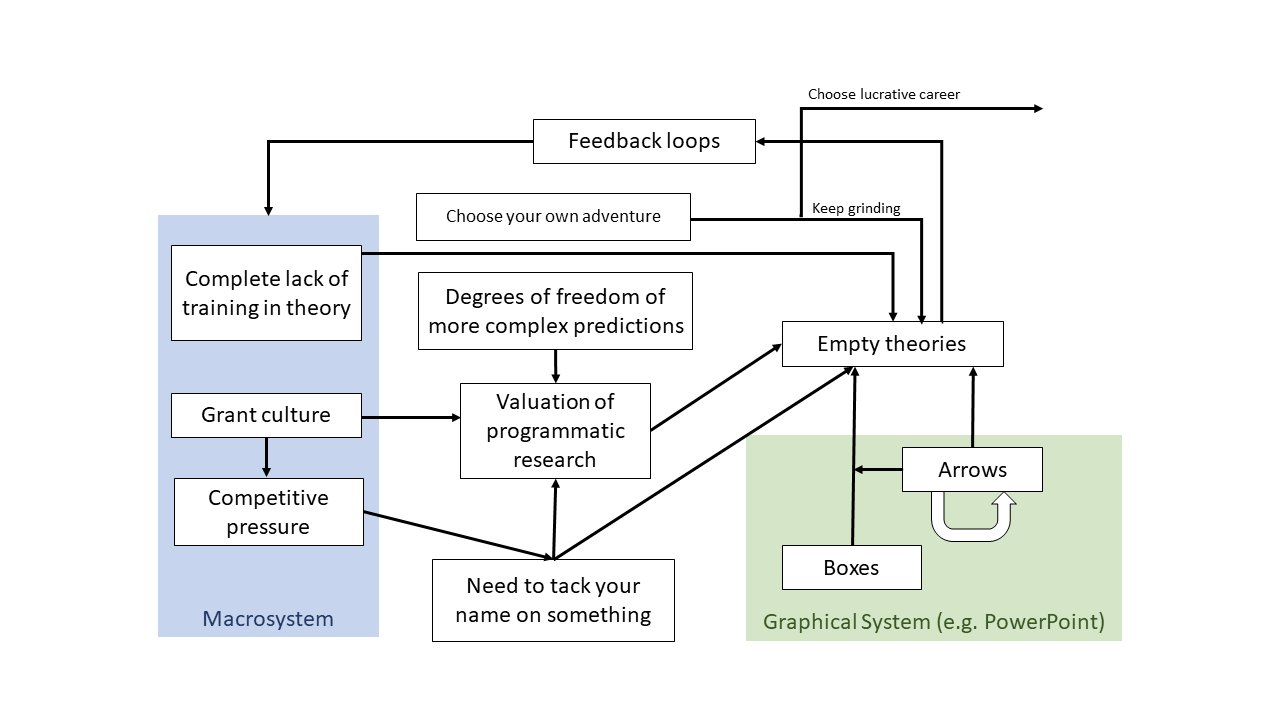 The Control Group Is Out Of Control provides good links for parapsychology as a control group for science.

On the easier problem of local theories

On the other hand, we can all agree that finding small-effect universal laws in messy domains like human society is a hard problem. In machine learning we frequently give up on that and just try to solve a local problem — does this work in this domain with enough certainty to help this problem? Then we still need to solve a problem about domain adaptation when we try to work out if we are still working on this problem, or at least one similar enough to this. But that feels like it might be easier by virtue of being less ambitious.