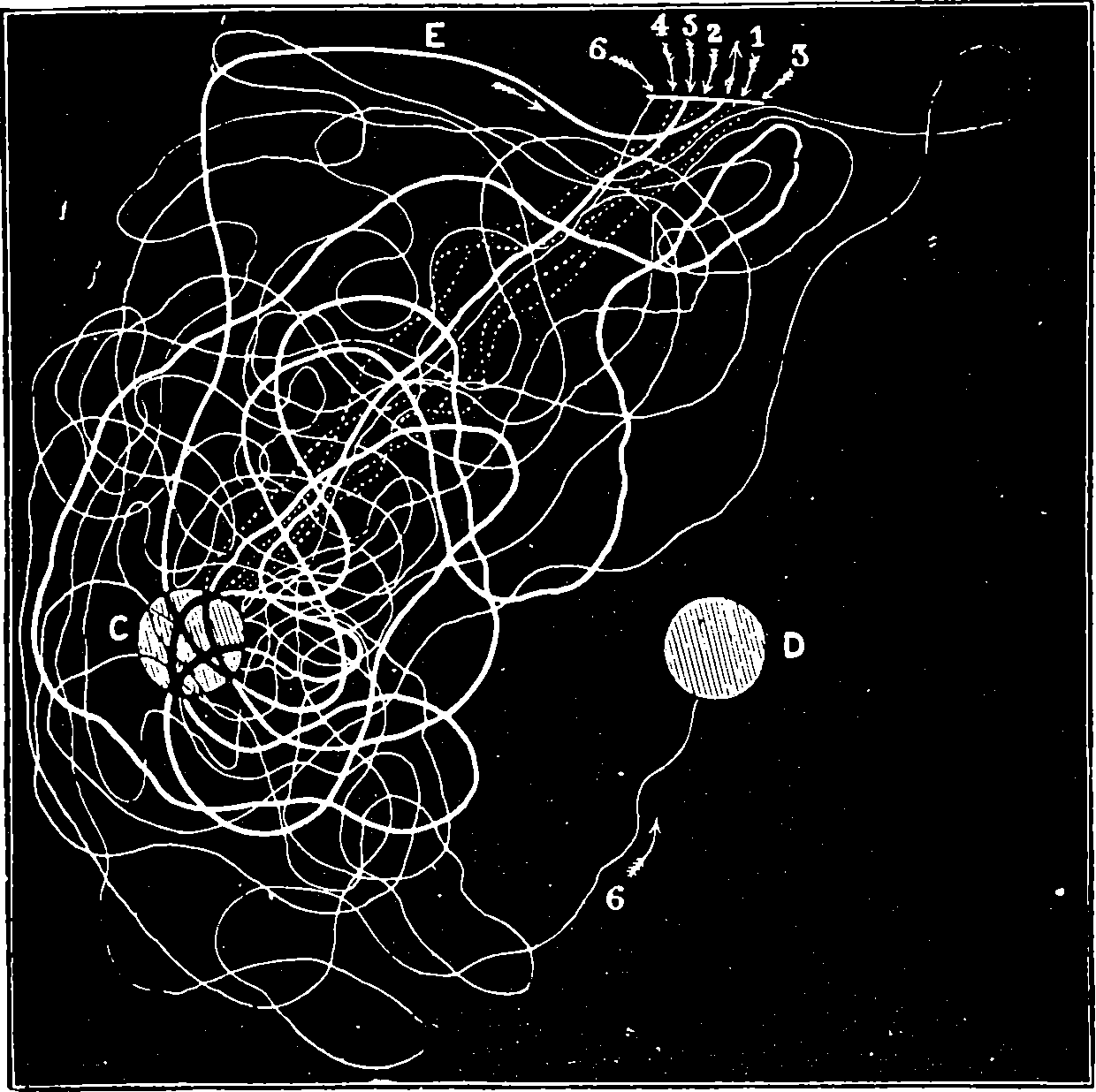 This is apparently what we call Bayesian inference these days. When we say Bayesian programming, we might mean a simple hierarchical model, but we want to emphasise hope that we might even succeed in doing inference for very complicated models indeed, possibly ones without tractable likelihoods of any kind, maybe even Turing-complete. Hope in this context means something like “we provide the programming primitives to in principle express the awful crazy likelihood structure of your complicated problem, although you are on your own in demonstrating any kind of concentration or convergence for your estimates of its posterior likelihood in the light of data.”

Mostly these tools are based on Markov Chain Monte Carlo sampling which turns out to be a startlingly general way to grind out the necessary calculations. There are other ways, such as classic conjugate priors, variational methods or reparameterisation flows, and many hybrids thereof.

See George Ho of PyMC3/PyMC4 for an in-depth introduction into what might be desirable to solve these problems in practice. 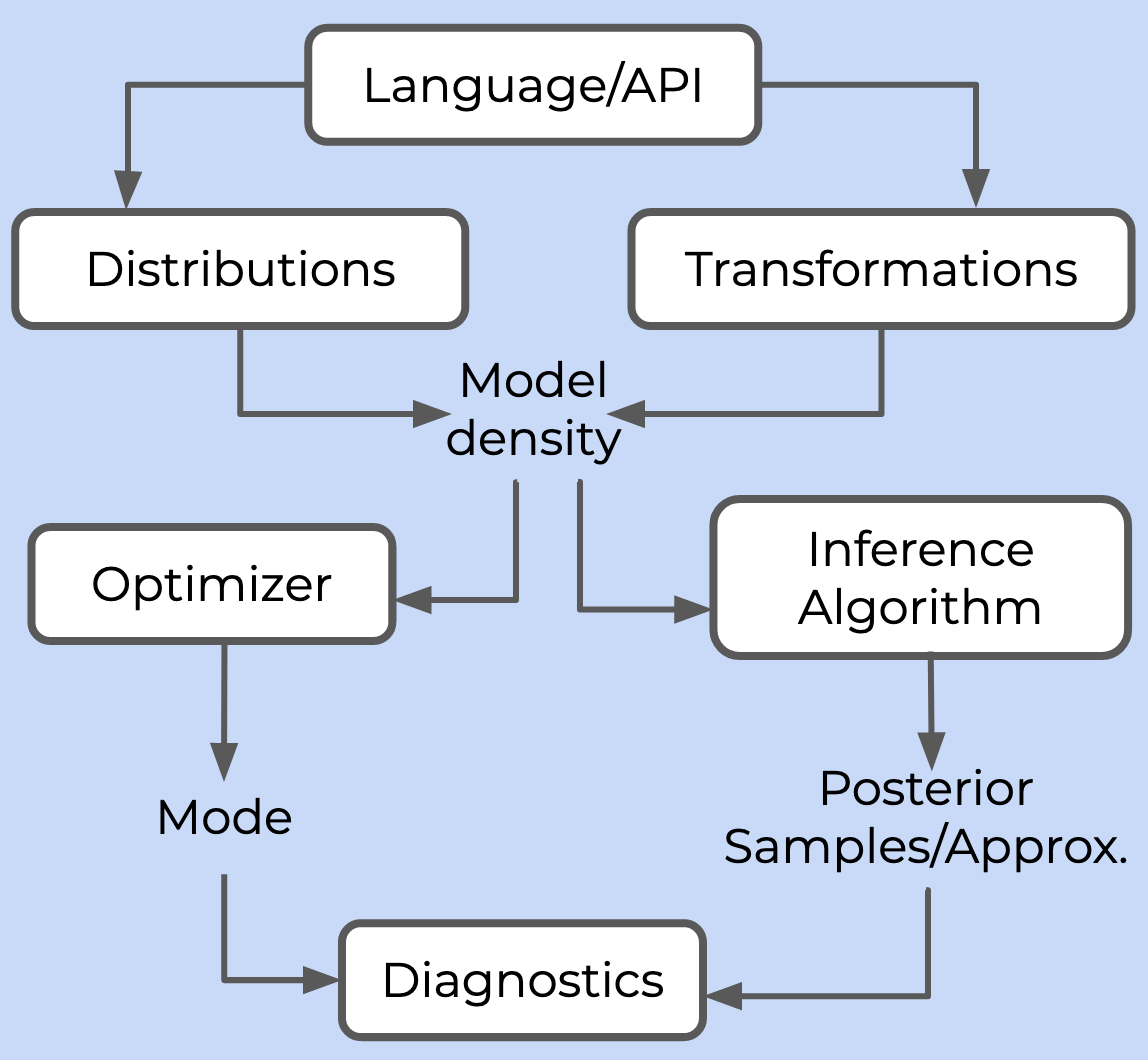 Stan is the inference toolbox for broad classes of Bayesian model and the de facto reference point. Usually seen in concert with brms which makes it easier to use for various standard regression models.

The basic execution structure of Stan is in the JSS paper (by Bob Carpenter, Andrew Matt Hoffman, Daniel Lee, Ben Goodrich, Michael Betancourt, Marcus Brubaker, Jiqiang Guo, Peter Li, and Allen Riddell) and in the reference manual. The details of autodiff are in the arXiv paper (by Bob Carpenter, Matt Hoffman, Marcus Brubaker, Daniel Lee, Peter Li, and Michael Betancourt). These are sort of background for what we’re trying to do.

If you haven’t read Maria Gorinova’s MS thesis and POPL paper (with Andrew Gordon and Charles Sutton), you should probably start there.

Radford Neal’s intro to HMC is nice, as is the one in David McKay’s book. Michael Betancourt’s papers are the thing to read to understand HMC deeply—he just wrote another brain bender on geometric autodiff (all on arXiv). Starting with the one on hierarchical models would be good as it explains the necessity of reparameterizations.

Also I recommend our JEBS paper (with Daniel Lee, and Jiqiang Guo) as it presents Stan from a user’s rather than a developer’s perspective.

Stan is a really good tool that I use all the time and if it solves your problem then it is an unbeatable developer experience. It does so much automatically, and makes it easy to do the right thing even where it is not automatic. It has some sharp boundaries around what it can do, however. Firstly, it cannot handle bounded parameter domains , or at least, ones that cannot easily be mapped onto scalar unbounded domains, so the space of e.g. positive-definite matrices, or discrete parameters will only work if you can find a sweet hack to shoehorn them in. It has no foreign function interface, so you can't plug external tools in, however, and if you want to do unorthodox variational inference it is not ideal. Since it is its own programming language, it is hard to work around this.

This is now baked in to tensorflow as a probabilistic programming interface.

The tensorflow entrant. Low-level and messy. Used in Edward2, above, but presumably more basic.

We believe the critical ideas to solve AI will come from a joint effort among a worldwide community of people pursuing diverse approaches. By open sourcing Pyro, we hope to encourage the scientific world to collaborate on making AI tools more flexible, open, and easy-to-use. We expect the current (alpha!) version of Pyro will be of most interest to probabilistic modelers who want to leverage large data sets and deep networks, PyTorch users who want easy-to-use Bayesian computation, and data scientists ready to explore the ragged edge of new technology.

Numpyro uses jax for autodiff and reputedly comes from the creators of pyro. It has no second-order derivatives as in HMC but looks sleek.

pyprob is a PyTorch-based library for probabilistic programming and inference compilation. The main focus of this library is on coupling existing simulation codebases with probabilistic inference with minimal intervention.

The main advantage of pyprob, compared against other probabilistic programming languages like Pyro, is a fully automatic amortized inference procedure based on importance sampling. pyprob only requires a generative model to be specified. Particularly, pyprob allows for efficient inference using inference compilation which trains a recurrent neural network as a proposal network.

Mamba is an open platform for the implementation and application of MCMC methods to perform Bayesian analysis in julia. The package provides a framework for (1) specification of hierarchical models through stated relationships between data, parameters, and statistical distributions; (2) block-updating of parameters with samplers provided, defined by the user, or available from other packages; (3) execution of sampling schemes; and (4) posterior inference. It is intended to give users access to all levels of the design and implementation of MCMC simulators to particularly aid in the development of new methods.

Several software options are available for MCMC sampling of Bayesian models. Individuals who are primarily interested in data analysis, unconcerned with the details of MCMC, and have models that can be fit in JAGS, Stan, or OpenBUGS are encouraged to use those programs. Mamba is intended for individuals who wish to have access to lower-level MCMC tools, are knowledgeable of MCMC methodologies, and have experience, or wish to gain experience, with their application. The package also provides stand-alone convergence diagnostics and posterior inference tools, which are essential for the analysis of MCMC output regardless of the software used to generate it.

Turing.jl is a Julia library for (universal) probabilistic programming. Current features include:

It is one of many julia options, and includes flashy MCMC, called AdvancedHMC.jl

Gen simplifies the use of probabilistic modeling and inference, by providing modeling languages in which users express models, and high-level programming constructs that automate aspects of inference.

Like some probabilistic programming research languages, Gen includes universal modeling languages that can represent any model, including models with stochastic structure, discrete and continuous random variables, and simulators. However, Gen is distinguished by the flexibility that it affords to users for customizing their inference algorithm.

It has an impressive talk demonstrating how you would interactively clean data using it.

Possibly it is a competitor of Klara.jl, the Juliastats MCMC.

Miletus is a financial product adn ter-structure modeling package that is available for quant stuff in Julia as part of the paid packages offerings in finance. Although it looks like it is also freely available?

Pymc3 is python+Theano. PyMC4 will depend upon Tensorflow.

Thomas Wiecki, Bayesian Deep Learning shows how to some variants with PyMC3.

greta models are written right in R, so there’s no need to learn another language like BUGS or Stan

I wonder how it uses Google Tensorflow.

Soss is a library for probabilistic programming.

Let’s jump right in with a simple linear model:

In Soss, models are first-class and function-like, and “applying” a model to its arguments gives a joint distribution.

Just a few of the things we can do in Soss:

InferPy seems to be a higher-level competitor to Edward2?

Church is a general-purpose Turing-complete Monte Carlo lisp-derivative, which is unbearably slow but does some reputedly cute tricks with modeling human problem-solving, and other likelihood-free methods, according to creators Noah Goodman and Joshua Tenenbaum.

See also Anglican, which is the same but different, being built in clojure, and hence also leveraging browser Clojurescript.

WebPPL is a successor to Church designed as a teaching language for probabilistic reasoning in the browser. If you like Javascript ML.